American football is a matter of the head. That's what they often say when describing the sport. Then the comparisons come up. Chess on grass. Coaches who direct their pawns in battle like war strategists - always trying to be one step ahead of the opponent. Players who recall from memory one of hundreds of plays and mechanically execute what is said to their ears. Yes, American football is lawn chess. But if it were marketed solely and exclusively as such, probably no one would be reading these lines on this website at this very moment, so far removed from lawn chess, because this platform would not exist.

For some years now, interest in the sport has been growing noticeably in Germany. The niche has become bigger. Private, free-to-air TV channels, web portals, newspapers, social media channels and magazines have found their place in it. Fan podcasts and programmes have emerged. Clubs, such as the German Sea Hawkers e.V., have formed. Because the premium league NFL, together with some media companies, has brought a product to Germany that offers entertainment in extremely high quality. Physical peak performances in high gloss and slow motion, from fantastic perspectives, with a highlight guarantee. It's a hype that we too - many members for decades - have fallen for.

For lawn chess, a small branch of the niche remains. Tactics, scouting, analyses are served there, but they will probably never be able to compete with pure highlight clips. Because the more complex it becomes, the smaller the audience.

Complexity, on the other hand, cannot be blamed for the dangers of the sport of American football. Nevertheless, the undoubted risks that athletes expose themselves to - for their own livelihood, but also for our pleasure - seem to get lost in the hype. Because this reality is uncomfortable. We, too, are fans first and foremost because we are fascinated by American football and especially the Seattle Seahawks and want to be entertained by it.

But this is precisely why we want to promote conscious consumption and an enlightened approach to our favourite sport in this project entitled "Headache" - and not suppress the negative aspects that are undoubtedly a part of American football.

Not only since the cinema film "Concussion" (German title: "Erschütternde Wahrheit") with Will Smith has neurological damage, which can be caused by collisions on the field, been a topic in American football. Concussions, head impacts and the possible resulting late effects (keyword CTE) are, along with the overly complex tactics board, the greatest existential threat to a sport that captivates fans with superhuman athleticism and raucous spectacle.

We at the German Sea Hawkers e.V. want to deal with this topic - in a form that has never been seen before in Germany. In this smorgasbord of stories, films, pictures, quotes and links, we approach an aspect of American football that awaits the players as soon as they step out of the spotlight into the darkness of the stadium catacombs. As soon as they no longer stand cheering in the end zone, but have to leave the field with a stooped posture on the back of a golf cart.

Many aspects that come up in this project have a connection to the Seattle Seahawks, some also to American football in Germany. Because our interest in what our favourite players bring to the field Sunday after Sunday should not stop at the screen through which we receive the game in our living room. This interest should inspire us to think about consequences, to classify incidents and to consume responsibly.

Because American football is all about the head.

On the following pages you can click, read, look, browse, learn, question, listen. Our small collection does not claim to be complete, nor does it make definitive statements about head injuries. We wish you an informative and entertaining time with the project "Headache".

The first part is a film contribution.

This film by director Josh Begley and producer Laura Poitras is a compilation of all concussions reported in the NFL during the 2017 season. The use of slowdown and rewind in combination with monotone background music dramatises the action while giving a good insight into the enormous forces at work when players' bodies crash into each other or onto the (artificial) turf.

The visible collisions all resulted in concussions. Late effects, such as those recognisable in CTE, can neither be confirmed nor ruled out on the basis of this diagnosis. In order to be able to classify head injuries, these two basic terms must first be distinguished from each other.

A concussion is referred to in technical jargon as a mild traumatic brain injury, i.e. a brain injury. A violent blow or impact causes temporary damage to the brain, which is associated with sudden loss of consciousness, nausea or vomiting, among other things. Craniocerebral traumas are divided into mild, moderate and severe.

CTE, written out: Chronic Traumatic Encephalopathy, also known as Dementia pugilistica or Boxer Syndrome, is caused, according to current scientific knowledge, by regular concussions that damage the brain mass. The possible consequences range from chronic pain to dementia and depression. So far, the disease can only be detected in deceased persons.

Neuropathologists Dr Ann McKee and Dr Bennet Omalu are the faces of the branch of science that has been studying head injuries in American football for years. Their publications put the NFL on the spot after the turn of the millennium and have since led to the league no longer denying a connection between its sport and head injuries.

Three publications from recent years are worth recommending. The Time dossier "War of the Minds" by Amrai Coen, which features Seattle Seahawks tight end Ed Dickson and also looks at the not-so-easy relationship between the two prominent scientists. The New York Times storytelling project on a 2017 study by McKee, shown in the image below. And the Hollywood film "Concussion" starring Will Smith, which provides an entertaining first overview of the topic. 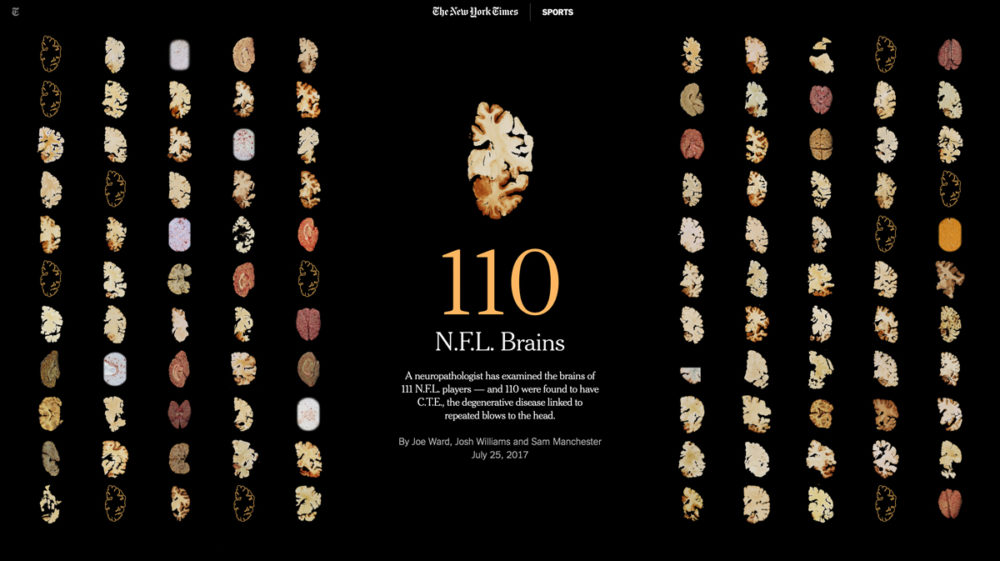 The editorial team of the German Sea Hawkers e.V. has compiled content to give fans of American football a new perspective on the sport. The following four stories of this project are about Russell Wilson, the supposedly unbreakable playmaker of the Seattle Seahawks, about an initiative for clean defending called "Hawk Tackling", about Erich Grau, a pioneer of German American football and about the experiences gained by Dr Ulrich Grünwald, association doctor in the AFVD, in the medical field of the sport. 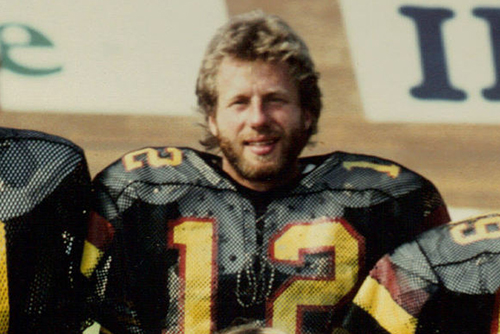 Building on the first four thematic complexes, here follow further aspects that are related to head injuries or even result from them. These include the myth about a supposed miracle water as well as new helmet technologies and two foundations that do similar work for different reasons. 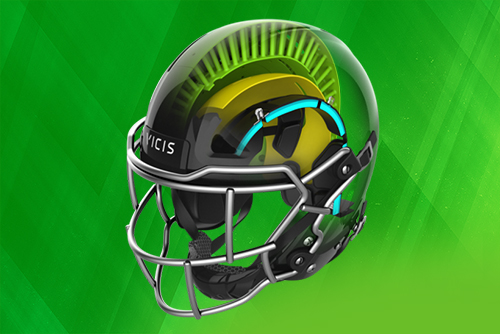 American football is a brutal sport in which monstrous bodies collide at extreme speeds. This has not only been known since the publication of this project. Neither does this smorgasbord have the purpose of disseminating new knowledge. The aim of "Kopfsache" was and is to create an understanding of the risks of the sport that so fascinates us all, based on selected content. Hopefully, this has been at least partially successful.

The editorial team is happy to receive suggestions and criticism at medien@germanseahawkers.com.

"Kopfsache" is a project of the German Sea Hawkers e.V. for a responsible approach to and enlightened consumption of the sport of American football. The idea was born in the 2018 offseason and the interviews were conducted in the summer of 2018. Our thanks go to Dr Ulrich Grünwald and Erich Grau, who took the time to answer our questions.